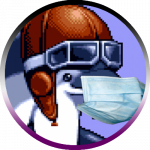 It's not 2017 anymore, we can stop pretending it was a good album.

Fuck, I was really hoping you were joking.

Anyone who thinks Cali DLX was a good album should be banned.